National Oceanic and Atmospheric Administration (NOAA) and the Port of Nagoya Public Aquarium have been conducting the program of satellite tagged loggerhead sea turtles since 2003.

The turtles were transported to the release point by the Aichi Maru of Miya Fisheries High School on April 2007.

Prior to the departure of Aichi Maru from the Port of Nagoya to Hawaii, Dr. George H. Balazs, Leader of the Marin Turtle Research Program at NOAA Fisheries Pacific Islands Fisheries Science Center, and Marc Rice, Director of the sea turtle Research Program at Hawaii Preparatory Academy (HPA), carefully attached satellite tags to the carapace of juvenile loggerhead sea turtles. 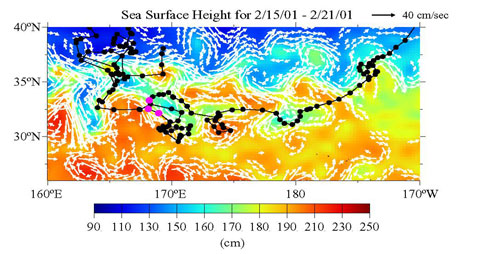 Turtles were released in the area about 32 degrees North latitude and 176 degrees East longitude. This particular area where closed to International Date Line, which has been recognized as a hot spot of juvenile turtles from the previous satellite research. Tagged Turtles' adventure started from here even though some of them had never felt wave and scent of ocean before.

What do they eat in the middle of high seas?

Denise M. Parker, Researcher of NOAA's Pacific Islands Fisheries Science Center in Oregon, makes maps and records the data from the satellite. He explained about the diet of loggerhead sea turtles.

"Loggerhead sea turtles change prey items throughout their life. When they are young in the open ocean, they eat animals that float on the surface such as Vellela, Janthina, lepas. In addition they also dive a little deeper to catch pyrosoma, salps or even heteropods, since the prey items are not evenly distributed over the entire ocean."

But still, how do young turtles find tiny mollusks? They cannot pick one by one in the vast North Pacific Ocean to fulfill their belly. “Several factors such as the temperature variation, currents, chlorophyll front, must be linked together to solve this question,” he said.

From the analysis of the satellite data, the researchers have found out that turtles stay close to 18 degree Celsius temperature line when they move across North Pacific Ocean.

"This specific temperature value of 18 degree Celsius in the North Pacific represents an area where things aggregate together at the surface of the ocean. The prey items that loggerheads eat are animals cannot move on their own or can swim little, so they would easily accumulate in the current of the surface waters. This could be like a long buffet Line for turtles," said Researcher Evan A. Howell who is also the turtle expert at NOAA’s Pacific Islands Fisheries Science Center. This discovery was a significant for conservation of loggerhead sea turtles.

When the longline fisheries harvest tuna and sword fish in the North Pacific, they hook loggerheads in accident. Therefore NOAA recommended the fisheries to avoid this region and that actually reduced the number of bycatch.

Dr. Jeffrey J. Polovina, Chief of the Ecosystem and Oceanography Division at the NOAA Pacific islands Fisheries science center, is an inventor of the EcoPath model. The Ecopath is the system can outlook ecological changes in both costal and open sea region. He has been following the tagged turtles to scrutinize how intricate ecological system works in the open ocean. 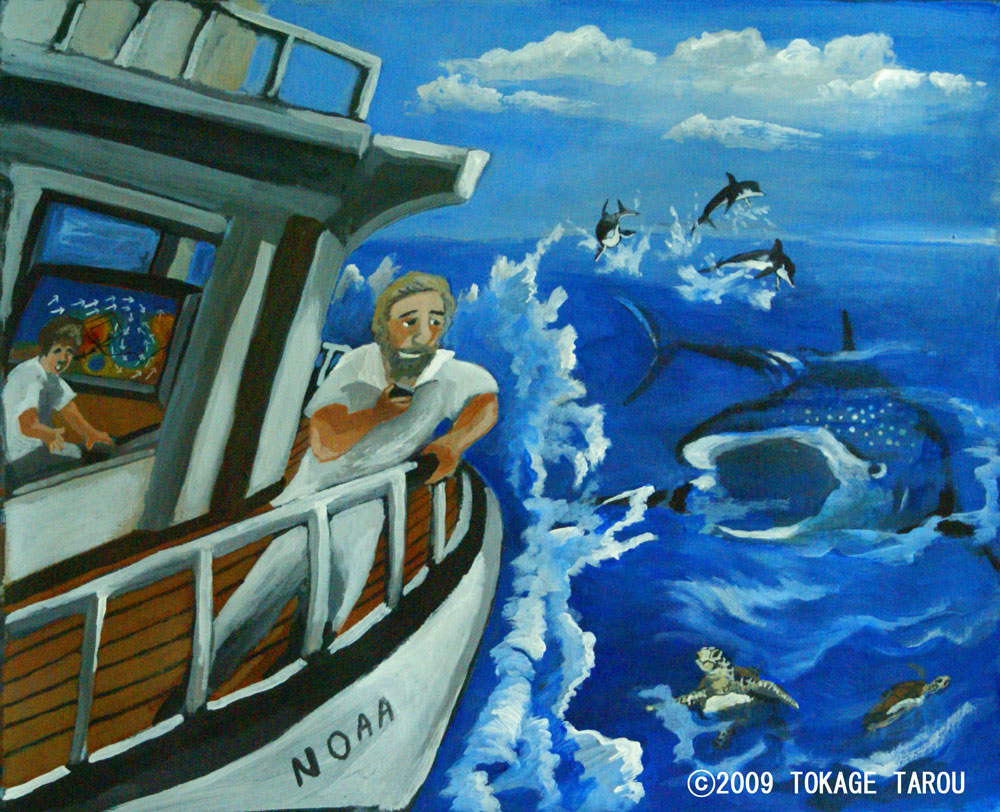 Dr. Polovina is also tracing the tagged whale shark to understand the feature of the ocean.

Dr. Polovina explained about the connection among diverse features of ocean.

"In the open ocean surface currents such as meanders and eddies provide habitats to Animals, just like corals and sea grasses do in the coastal regions. These ocean features consist of horizontal convergences and vertical upwellings which are like winds on the ground. Movements of water bring nutrition which is accumulated in the deep up to the surface. Then phytoplankton thrives and that leads concentration of zooplankton. Afterward food webs expand to higher level predators including turtles, whale sharks, tunas, sword fish, squid, and other fishes."

"Turtles are using eddy effectively to catch preys. The Turtles travel around the edge of eddy, one trip takes about a month and they do this for 4 months. Since the speed of the turtles is about same as eddy, probably they ride on the current. In this region upwelling conveys deeper preys to near the surface, so basically they do not have to chase preys either," he said. 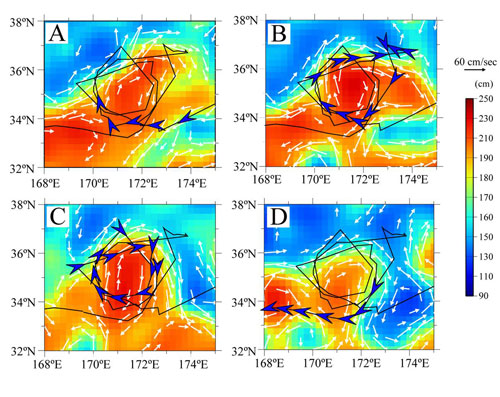 The blue arrows shows are showing the track of one turtle’s movement.
The movement indicates that the turtle swims along the eddy.
(The image provided by NOAA)

From the result of several research, loggerhead sea turtles born in Japan swim along with Kuroshio Current to North Pacific Current and they spend 2 to 6 years moving from west to east around that region. Then they go further east and stay off shore of the U.S. west coast. When they are matured, they back to natal beaches in Japan and remain in the western Pacific.

Dr. Polovina thinks that communication with public and students is very important along with scientific research and do have public talk and lecture.

He told us about surprising marine ecosystem.

Solving the Spiny Lobster mystery by Dr. Polovina is our next story!!
Click to the next story of Search for Lobster.