The Zoo is developing!

Tennoji Zoo has been changed. Since the original blue print was drawn in 1995, the natural habitats of the animals had been re-created in the zoo. The animals are displayed as if they are in the wilderness. The featured site is African Savannah Zone where you see several different kinds of animals living together.


The habitat is the savannah mainly in Sudan, Somalia and Nigeria in Africa. The height is 4 to 5 meters. The new born calf is two meter high. It grows 3 cm everyday and become double size in a year. The tongue is 40 cm long and good at grabbing acacia leaves on top of the tree. The kicking power of the back leg is strong enough to knock down lion to death. Normal life span is 25 to 30 years.


Call his name. Here he comes.


The population was 65,000 in Africa in 1970s, but only about 2,500 in 1993. Now the wild Black Rhinoceros range in South Africa, Namibia, Zimbabwe and Kenya. Conservation Programs have helped its population gradually increased since 1996. Another kind of Rhino, the White Rhinoceros has the population of 15,000 while the Northern White Rhinoceros is critically endangered. 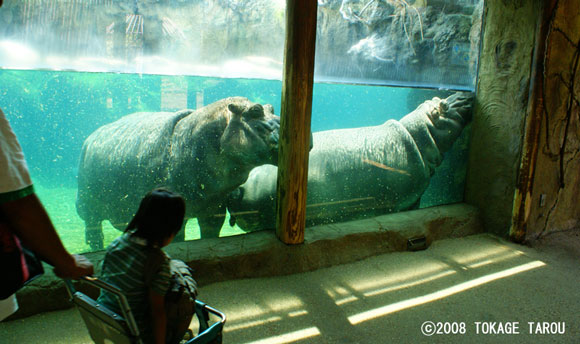 This is the very first facility in Japan that the visitors can observe Hippos in water. 450 tons of water in the tank is filtered 38 times a day. You can see the Tilapias poking Hippo's body to eat tiny bugs on his skin.

Tennoji Zoo has three hippopotamuses, the female Natsuko, her son Tetsuo, and Tetsuo's fiancé Teana. These are Natsuko and Teana (above). They young couple Teana and Tetsuo will live together in near future.

I am the Boss


The habitat is east side of Australia under the altitude of 1000 meters. The main diet is eucalyptus leaf which has poisonous substance and is slow to be digested. So the koala bear needs 22 hours of sleeping each day to take the nutrition from the leaf and not to spare energy efficiently. More than 1700 kinds of plants are threatened to extinct by global warming and climate change in Australia. Eucalyptus is not the exception. The effect to the Koala bears is inevitable.

A lot of unique ideas have become realities in the zoo from planting to designing architecturs to recreate the natural habitat of Asian and African animals. Most of the ideas came from the zookeepers and veterinarians, who spent long time with animals in the zoo.

The Tennoji Zoo is the third oldest Zoo in Japan. The biggest enclosure at the centre creates an environment just like the African Savannah where various species are living together.

Something to worry about?

He looks like "The Thinker" on top of the Gates of Hell by Auguste Rodin.

The Elephants love their zookeeper.

Big savannah in the big city of Osaka.

Who is looking at whom?

What is she doing?